~ Dr. Patricia Tannis on her sexual relations with King Waffle. 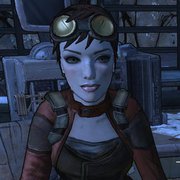 God put leeches on my windows.

Patricia Tannis is an overworked scientist with a grudge against humanity. She also enjoys long walks on the beach, a glass of wine by a roaring fireplace, and the collective works of Ludwig van Beethoven. 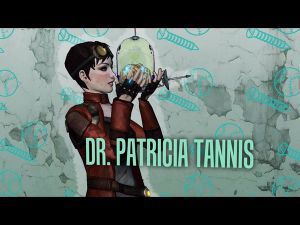 I enjoy slow dancing with my grandfather.

Dr. Tannis was spliced together from spare parts of Fatty Arbuckle after he melted as a result of spending too much time in a steam room. The extreme heat caused his excess cellulite to slip off his bones, clogging up the floor drain. Word came down from the heads to suction his fat out and sell it to make people for the unavoidable wars of the future.

Her dad would take her on vacations to the North Pole to snort polar bears like a vacuum while hungry Hungarians massaged her thighs with ketchup dispensers. It was all very pleasurable, but it always came to a bitter end when the milkmen pulled out his leaky hose and blasted them all with soda pop. Tannis was soaked

Her mom would smoke 23 cigarettes a day while calmly stroking her ukulele in her one good hand. This would cause Tannis much discomfort because she hated music, labeling it stupid and wasteful. So one day while her mother was off ironing her socks over a roaring fire, Tannis stole all the music instruments from the house and stuffed them inside a freshly baked Christmas goose. Stuffing the goose was one of her most frequent forms of ear protest, a form of protest she would become very famous for.

I read all of your emails via digital download.

While stationed on the planet Funkotron, Tannis started her research on Jimmy the Grapevine and the melancholy musical mating habits of the disemboweled aardvark. While doing her research she was careful to document it all down in a journal. Unfortunately the journal she used was made entirely out of chocolate and all of her work melted during one of Funkotron’s unusually hot (and rather funky) summers.

Her superiors over at Wikipedia were not too happy about that, so they decided to revoke her bathroom privileges.

While dodging bullets during the last zombie war of New Mexico, Tannis married her personal tape recorder and honeymooned with it in a padded cell. The doctors and nurses were very nice to her, feeding her old thumbtacks and rolled up socks that had once been owned by a Chinese family who never celebrated Christmas.

Tannis was last seen stripping naked and running out into the hot desert while screaming about how all of her eggs had become automatic.