From Illogicopedia
Jump to navigation Jump to search
Whoops! Maybe you were looking for Mario Kart Ate? 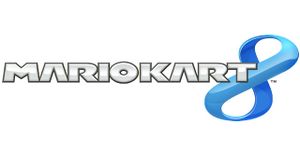 Check out that sweet logo. Look at that gawd-dahm eight. LOOK AT IT.

For those who can't handle the real truth, the spinners of fake truth at Wikipedia have a thoroughly boring article on Mario Kart 8.

Mario Kart 8 has 30 characters, ranging from Waluigi to Baby Rosalina to one of your Miis. The choices are... interesting, to say the least. For one (or should I say 8), we have all 7 Koopalings and... this Pink Gold Peach thingie. It's an oddball roster, but it'll have to do. Seriously, why does Pink Gold Peach even exist, exactly? AND GOD IS A CHARACTER!!!!!!!!!!!!!! 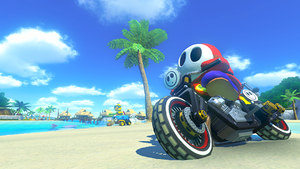 So, what differentiates these characters from each-other besides appearance? Simple: weight classes. Lightweight characters - like Lakitu and Baby Daisy - which are basically just zooming along at a slow but consistent rate, being cool and stuff. Middleweight characters - like Mario and Ludwig - have pretty average stats, which is nice if you can't decide on your play-style. Heavyweights - like Bowser and Pink Gold Peach - take a while to speed up, but

You can customize your vehicle, too. The parts you can change are the vehicle body, tire type, and glider - because of course these things can fly.

Mario Kart 8 has 16 brand new tracks, and 16 tracks from previous Mario Kart games. Guess which previous Rainbow Road was remade. It was the N64 one.

To give the new/old tracks a special touch is the new mechanic of anti-gravity and YEAH LET'S BUMP INTO STUFF LIKE A MADMAN LOLOLOLOLOLOL! This new mechanic - along with the returning bikes and underwater/flying sections - allows for even more epic tracks that almost distract you from the now-orchestrated music.

Oh, yeah, I should have mentioned that earlier, shouldn't I have? Well, yeah, the music's amazing because orchestra.

NO NOT THE DLC ANYTHING BUT THE DLC oh look another rainbow road.

So, yeah, the game has downloadable content now. I guess I should go over it.

First off, for absolutely free, you can have 3 vehicle bodies and 1 tire type based off Mercedes-Benz. What, you think I'm kidding? Nope! While it sounds like another random blabbering originating from this website, this is seriously a thing Nintendo decided to do. But, hey, at least it's free!

Okay, but how about the stuff you need to actually pay for? Well, there are two packs for 8 dollars each, each containing 3 new characters, 8 new tracks, and a few extra kart parts. As a bonus, you can get both at the same time for less, as well as some extra colors for Yoshi and Shy Guy.

Oh, and crossovers. If you ever wanted Mario, Link, and the Villager from Animal Crossing to race in Mute City, now is the time to do so.

Yep, Nintendo re-released this game. On the Switch. Greedy fecks.

Improved battle mode? The game should've had a decent battle mode in the first place!

New characters? Oh, who could it possibly be... I bet they added another version of Mario...

~ A lot of people, probably