Harvest Moon: Back To Nature

“The question is: 'Would I waste my precious time playing a farming simulation?'. And the answer is: 'No, no, now go away.' I've got far better things to do anyway, like making up more quotes for the kids on this website to use in reference to Chuck Norris, or something.”

~ Oscar Wilde on Harvest Moon: Back To Nature

~ Bill Cosby on Harvest Moon: Back To Nature 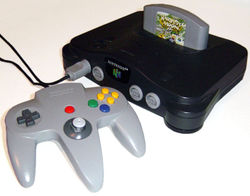 Despite popular belief, this is not Back To Nature, although the N64 version shown here does work in your PlayStation.

Harvest Moon: Back To Nature has been rated Not Safe For Anyone by the ESRB.

It Ain't Got No Backstory[edit | edit source]

In this installment, you still play as a farmer who decides to leave a good life in the city to move to a farming community named Mineral Town and farm. Said farmer is a total poser, however, and thus must learn how to farm half right or face being driven out of town by an angry mob brandishing meat cleavers, rusty bayonettes, and of course, pitchforks and torches. Do well, and you become Master of the Universe, much like He-Man, until you realize that you beat a farming sim and nobody cares.

How To Play The Game[edit | edit source]

In order to play Harvest Moon: Back To Nature, players must press lots of buttons in order to progress through the game. There are many challenges players must face, such as hurricanes, rusty tools, disgruntled chickens, labor-union organized farm hands, and of course, Lord Voldemort.

Players start with a post-apocalyptic wasteland, and are given three years to turn it into a prosperous farm. After whining about the task set before for two years, you then rush to harvest as many turnips, ears of corn, green peppers, and perhaps parsnips, while the rest of the town watches and makes fun of you. In addition to growing crops, farmers must care for sheep, cows, elephants, chickens, tasmanian devils, Olsen Twins, vicious rabbits, fish, O RLY owls, dogs, cats, young blushing virgins, and the youth of America. To start, you have a bunch of rusty tools and a stupid pair of overalls that makes you almost look like a farmer. As the game progresses, you acquire better tools, super insulated underwear that makes you leap over the tallest buildings in a single bound, a pimpmobile, and a spork (used for fighting off wild dogs that try to eat your chickens and your legs).

Also as the game progresses, you might end up making profits from farming. You can use these profits to remodel your house from a humble crack shack to a not-so-humble crack mansion. Then you can overrun the town and force all the townsfolk to worship you, because money = power, and the mayor of the town is really just a figurehead and can't actually do anything about your power trip anyhow. Later on, you acquire a spaceship and battle evil whalers on the moon by hurling your turnip crops at them.

Of course, things would be a LOT easier if you enslave these little "Harvest Sprites" which you could hypnotize by giving them lots of flour (or flower in Japanese spelling), which they probably use for baking those marijuana-filled brownies.

The control system in Harvest Moon: Back to Nature has been considered revolutionary. Much like Tetris, players are to click buttons to do things. Using the clicking button technology, Marvelous Dong Interactive has created a revolutionary gaming experience.

Characters come in four varities: You, girls you can marry, guys you can't marry, and middle age people. They all have a dysfunction of some sort, but the neuroses are what make them great.

Girls You Can Marry[edit | edit source]

In Harvest Moon: Back To Nature, players get woo potential brides by stalking, drugging, learning Peter Frampton songs for serenading purposes, and giving loads of gifts that leaves players wondering where the girls put them. Although the prospects seem hopeless, hard work and persistence will eventually pay off, and you'll have a wife that stays in the house all day and does nothing whatsoever. And now comes the part of the article where we meet them.

Guys You Cannot Marry or Lock In a Trunk, Unfortunately[edit | edit source]

In addition to farming, you can also attend festivals throughout the year, listed below:

There are lots of possible endings to Harvest Moon: Back To Nature. Can you find them all? Probably if you have lots of time to kill.

You end up purchasing Mineral Town with the wild profits you made from farming and pimping. Then you are given the option of paving Mineral Town into a megamall or an airport. Or if you're very ambitious, you can campaign to have Mineral Town chosen to host the 2024 Olympics. If you're sucessful, Philosophy Soccer will become one of the events to be played for years to come.

If you're "teh worst framer EVAR!!1!", then a giant rock will appear. Hit it with your head 12 times to unlock the 8th key to the apacolypse. The rock will break, killing all your friends. Unfortunately, you have none. The old drunkie, Charlie the Unicorn, will appear and tell you of the time in 3rd grade his parents threw him in the river. He will then fall over from lead poisoning. Stick the key in his stomach. You will die.

Yeah, baby, if you marry Cliff the game will end!!