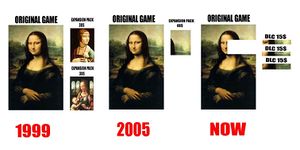 Downloadable content also known as DLC is a vast conspiracy designed to extort money from people who have bought video games by threatening to inform their grandmothers that they have bought video games that are not approved of by Jack Thompson, Jesus or Jack Black. In this extortion scheme, thousands of dollars are blackmailed out of about three different and distinct people who actually are nerdy enough to buy DLC but not nerdy enough to pirate it instead.