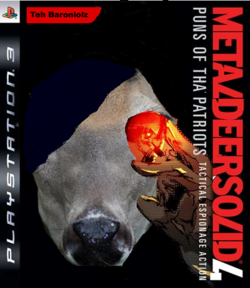 Metal Deer Solid is an absolutley pointless stealth game where you are a deer who sneaks around looking for the cheese but will only ever find fish. It can be played in Single player, Multiplayer and Half player. If anyone ever completes the game then world war three will erupt causing the mass production of I love nuked NY T-Shirts.(Been there, nuked that).

The main character is a deer called solid rake, who is upset after the death of his pet rock, and wants revenge on the Outer Heaven company cuz they never sent him his free socks (free with over £50 purchase of nanotechnology)

If you shoot someone they die.

If you get shot you die. Simple eh?

When the game starts you will be in a blank room with no doors or windows. Reset the PS3 and shove a waffle into the usb port. You should now be in a small building, being attacked by frogs. After fighting the frogs there will be a breif 20 minute cut-scene depicting solid rake sitting down and watching TV. Shortly after skipping this cut-scene you take some LSD and drown in a river of candyfloss. Then you are reborn and must beat a boss that is constructed of bannana skins, and can make you slip and fall into a deep pit of sorrow and lack of self-respect. If you defeat this boss then you are cheating and can be legally hung from a toilet seat.

Now solid rake is forced to sneak into one of outer havens sheds and rescue his mothers' sisters' friends' sons' dogs' friends' owners' mothers' dead nephews' ex-girlfriends' 2nd cousin twice removeds' mothers' cousins' nephews' grandmothers' fish. He sees a guy with mental health issues talking to a tree, who then attempts to burn it with a plastic spoon. Solid rake cannot let this happen and kills the guy before he can do damage to the tree. Rake then interrogates the tree, and learns that guy was his father, a.k.a Big Moss. Rake rents a grave to bury moss in, then swears and goes inside for a cup of coffee. While in the restaurant he looks in the menu and asks the waiter if they serve 'Revenge', to which the waiter replies 'we serve everybody'. Rake then eats the woman on the next table.

Sum random hobo tells rake that he doesn't exist, so he disappears in a puff of logic and reappears on the island of bannanalessness. Then rake must eat 50 cream buns in 1 minute. If he fails then the PS3 will rip your soul out-If you win you must defeat a boss, which is a large metal python, which pukes on you repeatedly, and is invincible. If you defeat this boss then rake dies of a fart attack. If you dont then you are sent back to the hobo, who has turned into a grue. To continue you must piss on the grue, who will cry, causing a parallel universe to collapse and fall on the HQ of Outer Heaven. Then you have beaten the game

The producers got bored and put the final two levels together, so they are Impossible. Mainly because the entire cast of enemies from two stages attack you at once, and also because as soon as you start this stage the graphic card will scream and run away, destroying your future aspirations in the process.

Reasons to kill yourself buy this game, supplied by a bunch of losers celebities[edit | edit source]

“We should kill all those responsible, play football with their hearts, piss on their graves and use their guts as skipping ropes.”

I've been up all night and this is funny