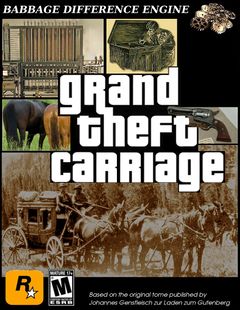 Based on the Gutenburg tome...

Grand Theft Carriage was a late 18th century video game developed for the Babbage Engine. Even though the technology of the time did not allow any actual copies to be constructed, all the code and art assets were developed by the year 1798 and only awaited the technological advancements in mechanical and electrical engineering of later generations to be compiled and distributed as an actual playable video game. Widely regarded as a classic of the "open world" or "sandbox" genres, (not to mention steam punk) Grand Theft Carriage immerses the player in a dangereqsue world of gentlemanly duels, horse races and uncivilized behavior in a pre-Victorian civilization.

A soundtrack was later added by Mr. B The Gentleman Rhymer.