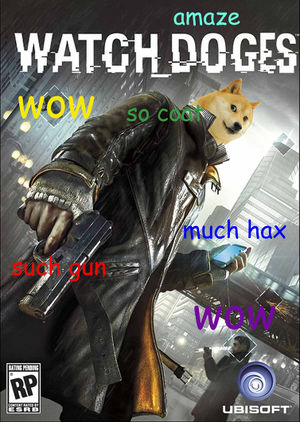 Playable on your X-Bone, of course.

Watch Doges is a popular video game about a technology savvy dog running loose in the streets of Chicago.

Watch Doges tells the exciting story of Aiden Pinscher, a once good dog pushed too far. After his entire litter of puppies is run over by a milk truck, Aiden spends the rest of his life doing whatever it takes to bring the driver to justice.

Game Informer said that the gameplay was pretty ruff, but that the plot had a lot of bite to it.

Shortly after the game was released a downloadable spin-off was released called Bad Bloodhound. In this game players assume the role of Milk-Bone, a grizzled and cynical old bloodhound looking to pull off one last adventure before being shipped out to the farm.