Goat Simulator is a platformer/physics/simulation/ovine-based/egglike/butter/god game made by Coffee Stain Studios. It holds the titles of Best Computer Game Of 2014, Funniest Game Of 2014, Most Accurate Simulation Game As Of 2014, and IUEFGHJKLUY4EJM4IRSTCXMJNW4UIYIM5UT3HMDFJHKDGWFHKLEUWGDHLMERJGWIOHKGHNRERREKWUN Of 2014. It is a completely accurate, realistic, and logical ga— oh, wait, it appears we have already passed the recommended amount of sarcasm… THIS GAME MAKES ZERO SENSE WHATSOEVER. This therefore makes it the greatest game of all time, all hail goat. Yes.

For those who can't handle the real truth, the spinners of fake truth at Wikipedia have a thoroughly boring article on Goat Simulator. 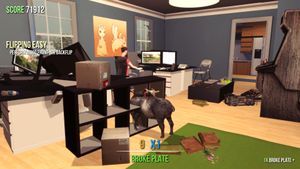 Hold up, are you sure this isn't a picture of a real-life goat?

Goat Simulator has led to the existence of the Goat Simulating Cult. These people perform actions extremely devoted to the well-being of the genus of Carpa. The only known actions (which have also all gotten headlines, because hddhjffhjeklwjudkdvhjcejhrk) are the following:

It is unknown whether or not goats like burgers.

In case people would get bored of this game after any amount of time less than a couple of hours, Soffee Ctain Stoodyos added some mutator thingies.

But don't take our word for it! Here's what others have to say:[edit]

“Playing this game is like making love to a beautiful woman. It’s something I can only do when I’m a goat.”

“GOATY. Changed our perception of reality as we know it.”

“You must waste your 10 bucks on literally anything else.”

“Goat Simulator has a deep story line and boasts some of the best physics and graphics I've seen in any modern day game. The portrayal of each character is well thought-out and the achievements gained by playing the game are meaningful. Whether you are gracefully flying over a map after a large explosion, or helping a person cross the road, players of all ages are bound to enjoy this game. My grandmother watched me play the game, and now she has set up her own Steam account for the sole purpose of playing Goat Simulator. Even my dog Clifford is getting into it, and now has accumulated over 300 hours worth of solid gamplay. Coffee Stain Studios should be given a big pat on the back and a rousing round of applause. 11/10- Would lick again”

“An incredibly accurate simulator of the life of a goat.”

“IS THIS THE REAL LIFE”

“Throughout my entire life, friends, family, teachers and doctors told me I would never goat. Well look at me now. 10/10”

“I am not sure what I am playing here... Still, it deserves a thumbs up because it is a unique experience with a lot of creative ideas thrown in the mix.”

“Have been chatting to people for 3 hours until I realized that I wasn't really playing online. 10/10 would talk to bots again”

“the book was better”

“This game gave me PhD in physics.”

“I need Goat Simulator in my life!”

“I pressed downvote to make you stop scrolling in the negative section and play the damn game.”

“Have been chatting to people for 3 hours until I realised I wasn't really playing online. 10/10 would talk to bots again”

“the book was better”

“I crashed into a garden party, set everyone on fire with a stove and dragged them into the forest, to sacrifice the people to satan, so I could become a demon goat. 10/10 would play again”

“Still a better MMO than The Elder Scrolls online.”

“Needed to get some points. Licked a person. He ran away screaming. Got the desired points. 10/10 would lick again.”

“Would play and/or lick again”