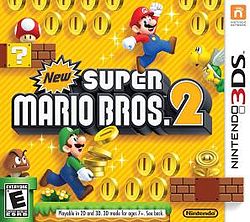 New Super Mario Bros. 2 is a platformer game released in 2012 for the Nintendo 3DS. And, honestly, when you think about it, it's kind of "random" already. "Internet random", of course.

For those who can't handle the real truth, the spinners of fake truth at Wikipedia have a thoroughly boring article on New Super Mario Bros. 2.

A brand new mode unlocked after completing World 1-*boss castle*. You can choose whether or not to equip the Invincibility Leaf upon activation. Includes the elusive Golden Mushroom, which gives the consumer 50 coins. The point is to get through three partially-randomized stages/levels as fast as you can, collecting as many coins as you can along the way. Oh, and some coins float in the air. Could someone please explain why there are floating coins?

What's with the coins, you ask? Here's why: Collecting 100 coins gives you an extra life. Therefore, collecting up to 900 coins without losing a life makes you a cat. Or at least it would, but the Cat Suit was a year away. 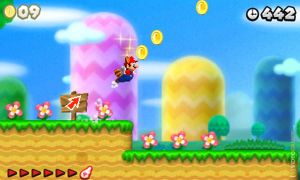 The Raccoon Suit in action. Weird.

The Super Leaf turns Mario into a bipedal raccoon (what's with all the bipedal animals?) that can fly. As if Mario weren't bizarre enough already. (Luigi turns into a fox... that's very important.)

The Invincibility Leaf is the same as the Super Leaf, except you're under the effects of a Super Star until you die or complete the level. Only appears in unbeaten levels, once you've already died five times... convenience FTW!

There's also the Tanooki Suit, which – wait, it's not in this one? Really? Come on, they have the Super Leaf AND the Invincibility Leaf! Why wouldn't they have the Tanooki Suit? ...Well, do they at least have the Statue Leaf, which pretty much does the same thing – NO?!!? aaarhghghARHGRHAGHGRHAGFHRKECJNTHJWRKHCJKSNMHJXTNHJKRTSHN JTSDUCJKNRTHT

Did you know that there's a type of mushroom that makes you feel like you're taller? Well, the Super Mushroom is just that... except the growth spurt is no illusion.

The Mini Mushroom reduces Mario to a size even a termite would be embarassed of.

Oh, and there's also the Mega Mushroom, which... can I... do I have to tell you what this thing does? You can figure it out on your own, right?

The Gold Flower is the same as the Fire Flower, except the fireballs turn everything into COINZ!!!!!!!11111!!!!!overused-stuff-FTW!!!!! Also, while it turns Mario into gold, Luigi only turns silver. Poor guy deserves better than that. *"Luigi's Mansion: Dark Moon" is released* That's better.

Do I even have to explain the 1-Up Mushroom?