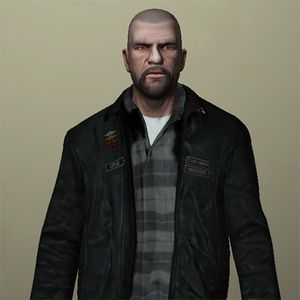 "What the heck is a grapenut?"

Johnny Klebitz was a Jewish biker who enjoyed reading the Torah, celebrating Hanukkah, and dealing methamphetamine while engaging in violent gunfights, particularly against deadbeat cacti.

He was once a member of the motorcycle gang The Lost which was made up entirely of people who refused to accept Jesus Christ as their lord and savior. His best friend was Jim Fitzgerald, a fellow biker who looked incredibly African American despite having a very Irish name. During his time with The Lost Johnny often clashed with Billy Grey, who served as the club’s president. Grey believed that all members of The Lost should be forced to spend their free time reading unpublished science fiction novels, which went against Johnny’s belief that all members should be forced to spend their free time reading the backs of cereal boxes.

Johnny liked to yell a lot and ride his motorcycle. Sometimes he would eat nasty food that had been cooked by street vendors. He lived in a very dirty house and slept on a very dirty mattress and wore very dirty clothes. His life was not marked by many pleasures.