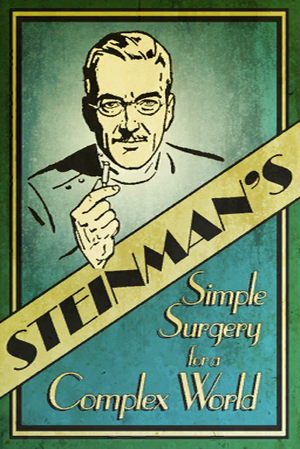 Operate on your wife until she turns into toothpaste.

“Sometimes I beat my wife and sometimes she beats me but the one thing we can’t beat is free government cheese.”

~ Dr. Steinman, on why he hates the alphabet.

Dr. Elvis Steinman has written a book report on my nose hairs.

Dr. Steinman was once a baby and he enjoyed crawling around on the floor and performing medical experiments on the local mailman. He had a cat named Ralph and a dog named Fluffy and on weekends the townspeople would hunt him down like a fox while he hid in a house made entirely of government cheese. He never went to school, never learned to read or write, and his sisters teased him and made him apply ointment to his forehead while using an old sock he found on the sidewalk.

Dr. Steinman lives in the town of Bioshock, which is a pretty cool place. It is underwater and is not afraid of sharks or nothing. There are little sisters and big daddies and tonics and plasmids and splicers and security bots. You can roll up right up upon a guy and smash him right in the face with a wrench and no one will say a thing. But whatever you do don’t get caught playing baseball with a little sister because if you do then Andrew Ryan will capture you and turn you into a fireplace.

“The French certainty know how to make a tasty trapdoor.”

~ Dr. Steinman, on why he loves the alphabet.

Dr. Elvis Steinman has a hook for a hand and whenever he picks his nose he cuts it open and the blood pours out like a faucet. He has two left feet and enjoy dancing like an idiot to his favorite birthday songs. His arms are made of books and his eyes can see through wooden doors. His neck is as rubbery as the rubber on an old car tire. His soul is made out of used DVDs and toilet plungers.