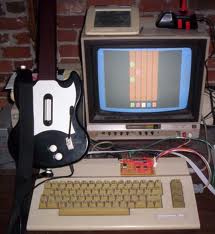 Proof that the series has been ported to every games system known to man.

Guitar Hero is a game where you play guitar or in the instance of Guitar Hero World Tour or Rock Band (which seems like a knock-off but is by the same company) you can sing or bass or drums ROKK!!!!!!!!!!! It features songs like... "Through the Fire and Flames" by Dragonforce and speaking of Dragonforce, you can download almost every single song by them because, believe it or not, their songs are just retarded verses with pointless guitar solos! Of course there are four difficulties but when talking to anyone over the internet about it, you're a pansy if you don't play expert! Isn't it great? Even though expert is impossible? Wow! It also features Easy songs which progressively got harder as the series went on until the point, in World Tour, there's really no indication of what songs are Easy. Remember, you'll face a fine of all of your self-esteem and constant flaming on the Internet if you ever brag about Easy, Medium, or Hard on Guitar Hero. So get ready to rock, pansy.