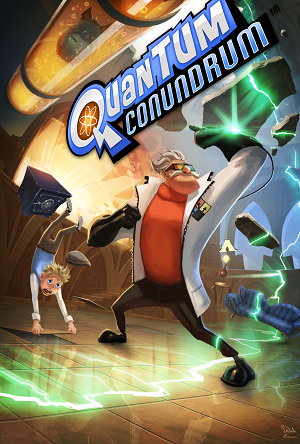 “The game is a dementia simulator. You don't know who you are, you are locked in a strange place with no reason and you do strange things because a condescending voice in your head tells you to. Meanwhile learning the laws of physics and enjoying the view.”

Quantum Conundrum is a puzzle-platformer video game created by that woman who created Portal.

You play the nephew to a brilliant but eccentric inventor named Fitz Quadwrangle. Shortly because the nephew’s arrival, Fitz accidentally teleported himself to a pocket dimension (whatever that is) and received a rather nasty knock on the head, resulting in memory loss. Unable to remember how he trapped himself, he now has to rely on his nephew to rescue him.

The game consist mostly of puzzles, all of which are solved through the changing of various dimensions. This is accomplished through a machine called the Inter-Dimensional Shift Device.

Unfortunately, most of these puzzles also demand twitch reflexes and precision platforming. This would not be so bad if it was not for the fact that the player’s entire body is invisible, thus often resulting in jumping and timing miscalculations. 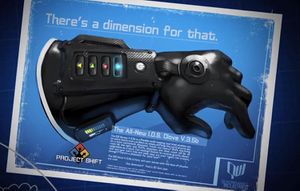 Looking oddly similar to the Nintendo Power Glove, the Inter-Dimensional Shift Device (or, as us hardcore scientists call it, the IDS) is an invention created by Quadwrangle that allow the player to move from dimension to dimension. This is helpful considering that nearly all the puzzles in the game can conveniently by solved by utilizing one or more of the available dimensions.

“And I would have enjoyed it too, if it wasn’t for that wonky platforming!”

Critics were rather divided with many praising the puzzles but criticism the platforming segments as being keyboard-smashingly difficult. Perhaps on the next game Kim and the gang might want to try and do a better job of making those platforming sections more enjoyable.

Or perhaps just cut them altogether.