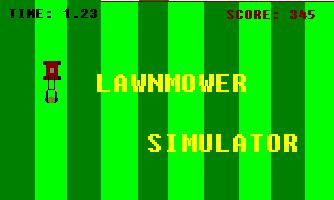 Lawnmower Simulator is the name of a series of extremely popular video games produced by Boresoft and later Maxis for a variety of platforms. It is the best selling series of computer games of all time in the USA and many countries around the world, although outpaced by the popular 'Virtual Rice Farmer' series in China.

Lawnmower Simulator sees the player mowing a variety of lawns which vary in the level of difficulty as the game progresses. As the player completes a lawn they are rewarded according to the time scored and their overall efficiency, and, in several versions, penalized according to the household pets run over. The player can then use the reward to invest in new lawnmowers and parts.

The original Lawnmower Simulator was initially created by computer programmer Hank Brody. Brody stated: "I realized that it was possible to allow people to experience the full delights of mowing a lawn, without actually having to do it. Or, for that matter, owning a lawn". The first rough version of Lawnmower Simulator was created on a Commodore 64 in 1985, and featured only incredibly basic graphics. The first version of the game was released by Boresoft for the Amiga 500 in early 1987, to instant critical acclaim and success. According to some critics it "completely revolutionized the whole world of games" and gave a "totally immersive experience". Buoyed by this early success Boresoft went on to release 'Lawnmower Simulator II' in 1991, which sold 50,000 copies in its first week.

In 1993, software company Maxis expressed an interest in the series, and purchased the rights from the then flagging Boresoft. Maxis' first offering, 'Sim Lawnmower', was released in 1995, where it stayed at the top of the US games chart for over 57 weeks, and became one of the best-selling games of all time. Maxis began releasing versions for MicrosoftWindows, and the next year released the expansion pack "Places to Mow" featuring 8 new mowers and over 30 new lawns, and a ride on lawnmower for the first time.

In 1997, Maxis released 'Sim Lawnmower 2000', which replaced the traditional top-down approach with an isometric view, and provided more features than ever before. Together with expansion, 'Lawns to Conquer' the game topped the international charts for 16 weeks. However, Maxis' variation on the theme, 'Fantasy Lawnmower', which saw the player in a range of settings from fantasy castle lawns to futuristic domed lawns fared disappointingly, leading to the resignation of the Maxis CEO later that year.

Maxis released 'Sim Lawnmower 3000' in 2001, which became the best-selling computer game of all time, selling 1.1 billion copies internationally, roughly one for every sixth person in the world. The game has been hailed at the ultimate computer gaming experience, and 'the best game in the history of gaming', and that it 'hasn't been topped since...not even by its later incarnations'. This edition marked the game's transition into partial 3d, with improved functionality, huge selection of lawnmowers, riveting storyline, impressive graphics and, for the very first time, multi player capabilities.

Maxis' latest version 'Sim Lawnmower 4000 - Adventures in Lawnmowing', released 2005 features the most highly realistic graphics yet, with full 3d, bloom lighting effects, particle filtering, advanced grass and fauna rendering, and bilinear contours in addition to realistic sounds and huge game environments - a PC has not yet been built that can run this with all graphic options on full. However, many gaming purists prefer the gameplay and plot of 3000.

The Lawnmower Simulator series also has an active online and modding community, and many fan levels and modifications have been added to Sim Lawnmower 3000, including custom gardens, modded lawnmowers and the controversial 'Hot Kerosene' mod, which replaces the player character's clothes with skin-coloured clothes to give a hugely unconvincing illusion of nudity. When released, this mod caused some pressure groups to call for an outright ban on the game.