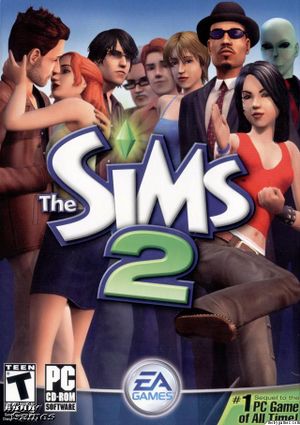 The Sims 2 is a game produced by Elassint & Co. during the 2900's. It was released in 1970 under the name "THE ELASSINT IS GRUE" and was later renamed "The Sims 2". The game consists entirely of bad spleling in tjhe mnues adn teh pie mneus. But after that it's all good spelling. Oh yeah, what you do? You get some virtual human called Elassint and you sit there and tell him to bake pies. When Elassint has baked 1,000 pies you have to get him to throw them in the bin. The challenge of this task is that Elassint will sometimes either try to eat the pie or he will try to paint the pie or he will try to talk about the pie or he will try to serve the pie or he will just refuse to throw the pie away. If either of these happen you must shout at him "BOOLPROP!!!" and then he shouts at you "NO MORE CHEESE!!!!! DUCKS! PICKLE! FLURB!" and then he gets to work throwing away the pies. After he has finished throwing away the pies the game crashes and Elassint dies of injuries sustained to the pinkie in hospital later that day. Poor Elassint. Another victim of computer crashes. Also, FUCK THAT STUPID SHIT because it's the shitty 1970's technonlogy. DOS! UNIX!! LINUX!!! MAC!!!! DONALDS!!!!! FOOOOOOOOORRRRRRRDDDDD!!!!!! Also, Pickled. Purple Peaches! Woo Hoo!