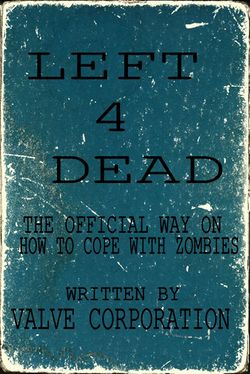 This hand only has four fingers, further playing with the "four" theme.

Left 4 Dead is a popular zombie-slaying video game, which centres around four characters that have, seemingly, been left to die. Four things differentiate Left 4 Dead from any previous first person zombie-slayer (namely House of the Dead), though, primarily the artificially intelligent overseer (“The Director”) that places weapons, ammo, items and enemy spawn points randomly at any of the four, pre-set, locations throughout the four story mode “campaigns”. Its second major difference is its co-operative mode, allowing you to play with up to three other people (four total) and, using each of your unique skills, conquer any of the four campaigns while criticizing each other for “not speaking English”. Thirdly it offers a versus mode, allowing you to play as any of the four special infected and try and kill all four of the survivors befour they can complete the campaign. Fourthly it has an, at first amusing, but ultimately limiting, obsession with things coming in fours (four survivors, four weapons, four special infected (and the witch), four chapters in each of the four campaigns (and the finale), four different rescue vehicles and so fourth).

The four characters in Left 4 Dead have been praised, by critics, for their originality and depth despite the fact they do a whole lot less talking than similar characters found in most B-movies. “Sure they don’t say much, but it’s the way they say “I need ammo” (or whatever) that really gives the characters added dimensions.” A critic from Gamer magazine said. However, if based on the character profiles, given in the instruction booklet, most agree that they are satirical representations of tried and tested zombie-movie characters.

Victim of the fact his parents were expecting a girl Francis is riddled with insecurities and feels a constant need to rebel against authorities (this can be gleaned from his effeminate giggle anytime a zombie police officer is re-killed). Francis was on the FBI watch list of "people most likely to try and overturn the government in the event of severe civil unrest". Before the apocalypse he could most likely be found lurking on various anarchist websites.

Louis worked in an office before apocalypse and was a devoted father of two small boys. He wishes sincerely that his fellow survivors were as cool as him ("Couldn't Zoey be more Latino?" he can be heard whispering when the others aren't looking). Louis can often be heard yelling about "pills". One can only assume that he is referring to the drugs he must consume in order to continue living. After an extended period of time without pills Louis will say: "At this rate... I... I'm not gonna make it...".

The special infected each have a higher intelligence level and various abilities above that of the common infected. They, like the other variables, are dropped into the player’s campaign at The Director’s discretion, usually causing the player some momentary distress.

It is also widely agreed that the four “special infected” give the game texture, not just by stopping it from being boring, but they also add to the depth of the narrative, with each of them making an important social comment.

The hunter is a predatory infected that wears a hooded top, has an a.s.b.o and listens to loud, angry music (Rave and hardcore rave, for example) it will attack the survivors – tearing into their flesh and (if one were being creative with language) “raping” them. This is clearly a metaphor for the modern day male teenager whom, most feel, has been “mutated” by the rap music that teaches them to disrespect women and glorifies murder.

The message that immediately comes to mind just by seeing the boomer is of America’s constant over-consumption. However due to the fact it vomits on the survivors (to attract a further horde of zombies to do damage) it has been criticised for mocking those who live with bulimia. Valve, creators of Left 4 Dead, responded to these accusations: “That was never our intention at all! We were actually trying to raise awareness of the disorder. Is now a good time to mention that six cents from every game purchased goes towards research?”

The smoker is commonly criticised for acting a lot like the “lickers”, from the Resident Evil series of games, by wrapping its tongue around the survivor and then attacking them. In its defence, though, the smoker coughs a lot, allowing the survivors to prepare for its attack. It also allows Valve to dodge nasty copyright laws and insert their, rather obvious, opinion that smoking is disadvantageous for stealth purposes. In a world that worked, without the apocalypse, Smokers would have been best friends with Bill, rallying and raving on about tobacco.

There are several theories behind what message the Tank is giving out, however, it does appear to be a warning against women’s obsessions with built-up muscles on men; it can cause men to eventually disfigure themselves while trying to please. Other theories suggest that the designers simply wanted to make a subtle reference to Marvel's comic book character The Hulk. However on the official site it says: “We were actually trying to emphasise how unfair the Iraq war is. America has these huge kick-ass tanks and all the other side has are tiny guns. That’s what we were trying to get across and we hope people realise that…”.

Fourth and finally is the witch who can be found crying at random (pre-set) points throughout the campaign. When disturbed she screeches and attacks the survivor who disturbed her, before running away to another part of the level. The story that seems to have been attached to the half-naked girl is that before she died with disappointing breasts, she was made homeless and had to pawn her clothes for survival, and this tragedy stuck with her even after her (probable) death. Valve's official story is that she symbolises “the tragedy of all teenage girls nowadays, menstruating and becoming stressed out just because of the way they were born.”

The safe rooms represent (in this case is) a church, where you are safe, provided you are over the age of ten and have let the lord into your heart.

The four campaigns each tell a story (four stories total) of survival, hope and courage in the face of overwhelming adversity as they take the player through a post-apocalyptic landscape, two are set in a city, one in a rural town and a final one in the countryside (four total). In each campaign the survivors battle their way from one safe room (a room in which one is safe) to the next until they finally reach the rescue vehicle and are rescued. Despite the non-stop action each tells a touching story of a world left to die and usually with a subtext that reflects on modern day issues.

The “No Mercy” campaign sees the survivors battling their way through the ruined city, the subway and the sewers in order to reach the Mercy Hospital, to be saved, or in a sense, “healed”. The story, while riddled with B-movie clichés and the unfunny play on words title, actually conveys an important message: euthanasia is wrong. If we take the bulk of the mission as a metaphor for cancer (the ache of having to leave home, the agony of a long uncertain journey etc.) and the conclusion as the cure then it obviously states that, while the disease may be painful, it is always better to go to hospital for the cure than to die. Also yes, There are guns and weapons built into and scattered though-out hospitals. E.R. fans would clarify this to be true.. 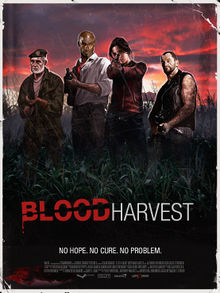 Each campaign shows a poster while it's loading, giving further insight to the story

Another story with a cleverly worded title, death toll features a tunnel that people would, ordinarily, have to pay in order to go through. In this case the survivors have to pay with sweat, tears and in unfortunate cases blood. Paying in order to drive their car though a tunnel (that will get them to their destination faster) is an idea that offends most Americans who refuse to accept the fact of Global Warming (and hence Al Gore) this campaign tells us that a short term evil (paying/pain) leads to a long term good (survival).

Dead Air features the survivors making their way through the city to get to the airport and escape on an army aircraft. During the story the survivors witness a couple of commercial flights fall out of the sky and explode on impact. This story obviously has a comment about America’s current fuel crisis, and how the immediate effect of there being no fuel will result in many American lives being lost, perhaps as many, or even over four thousand. The fact that the only working aircraft is a military vehicle reveals the message that America needs more war. More war equals more oil. Probably. It also could mean that even in a zombie Apocalypse them damn terrorists are still at it. 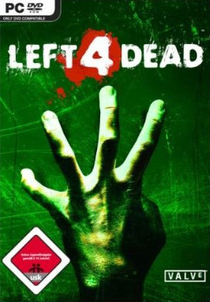 The Germans and Japanese whined that the cover was too violent, so it was changed so the hand had all five fingers, with the thumb very lazily hidden.

Blood harvest talks about the collapse of industry in rural areas, obviously they’d collapse in the event of a zombie-apocalypse, but you can tell that the businesses that appear in Blood Harvest (railway, farming) were well on their way to disrepair before all the death and stuff. This is shown by some of the desperate graffiti on the walls “We’re all fucked” and “No really, unless the Obama administration fulfills its promises I’ll have to put my shotgun in my mouth and close up shop. Also zombies.”

For those who can't handle the real truth, the spinners of fake truth at Wikipedia have a thoroughly boring article on Left 4 Dead.

There are rumours that a movie (or more accurately, four movies) is in the works. The plot details and story are yet to be revealed as such, but it is presumed that the movie(s) (directed by Uwe Boll or something) will follow the plotlines of the story mode levels quite closely, but without cutting back on the action. "We still want to have all that the game had, just make the stories a bit clearer with more budget-reducing talkie bits." There is also some speculation that with intelligent scene splicing every time you watch the DVD will be different.