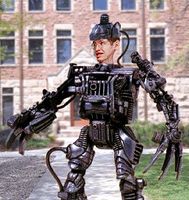 Tired of his old model, Hawking decided to go all the way and have a full body robot transplant. 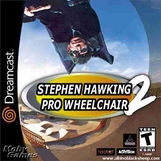 Steven Hawking (pronounced 'Steven Talking' by his computer) is a gifted mastermind who is secretly trying to take over the world one field of science at a time, beginning with astrophysics and moving on to Molecular biology. The 5 1/2th incarnation of The Doctor, he has also done it with Billie Piper but not Catherine Tate. Shudder.

Steven Hawking's arch nemesis is Gaz, who appears at inopportune moments such as when Hawking is taking a dump, checking the football pools or singing karaoke.

He is your computer's default voice, no matter what Microsoft Sam thinks.

Stephen Hawking (born 1832-present) is a world-famous painter, cartographer, and collector of body cheese of many animals. Using his cybernetic extensions, including four wheels and a titanium skeleton linked to a robotic voice machine, he intimidates rival artists and mapmakers into giving in to his demands on the threat of immolation, and is known to ransack different farms, public bathrooms, and airplane seats to gather his cheese collection. Feeding entirely on pebbles and lava by connecting his large, hollow metallic hose-shaped hose to the top of the nearest erupting volcanoes, Stephen Hawking stores his excess rock food in his cheeks during the winter.

Mr. Hawking now resides in the basements and cellars of Oxford University in England, nourishing himself with a new device that allows him to use his vacuum-tube penis to dig miles into the Earth towards the core. Stephen Hawking runs on Slackware Linux 10.1, and has had a record-breaking uptime of 4,954,122 hours and 54 minutes without needing a reboot. He has only been hacked once, by a retarded child who ate giant pandas.